skip to main | skip to sidebar

The laser turns 50 this year with the construction of the first ruby laser.

How Stuff Works and this video gives an overview of how lasers work, the video concentrates on the Ruby laser. The How Stuff Works gives a more general overview but talks about the transition of an electron between orbit levels for the generation of lasing photons. A CO2 laser, whilst the principles are the same, the energy level transitions are between vibration modes of the atoms within the molecule.

This is impossible according to the climate change science deniers. We have a few gifted persons about who can make up their science and do demand that CO2 is inert in the infra-red and thus cannot affect temperature. Yet the very thing they deny is exploited to build CO2 lasers that can emit beams of infra-red, powerful invisible beams of heat. 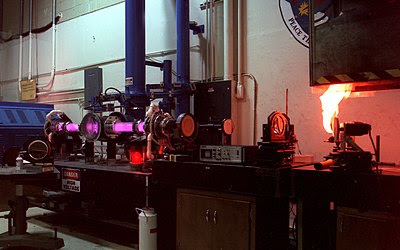 "Population inversion" is a necessary condition for lasers. It’s where the quantity of the higher energy level stuff (molecules in CO2’s case) is greater than the lower level after emission. This has to be so - the photon, as it approaches a molecule will be absorbed if the molecule is in the lower state, if it passes a molecule in the high state, it could stimulate emission and now we have 2 photons in phase, same wavelength, traveling in the same direction. It's the later we want so we definitely don't want too many in the low state.

A trick (now I've used that word, this is all impossible) that most lasers, including CO2, is to utilise 3 levels. The first is the ground state, the natural state of the supply of material. The 2nd state is the high energy level. The 3rd is an intermediately level that is the result of the 2nd level losing a photon, hopefully stimulated. The trick is to easily pump up level 2, and keep pumping level 2 and have level 3 be able to depopulate quickly itself or induced to do so.
A typical CO2 laser gas fill is 9.5% CO2, 13.5% N2, and 77%, the rest, He. The nitrogen gas is pumped electrically to an energy level that is close to the 001 mode of CO2, the nitrogen imparts energy to CO2.

N2, as you're probably aware, is the major gas of our atmosphere and is transparent to infra-red photons so will not affect the laser's operation nor does it keep Earth warmer than the moon (the moon being close enough to the same distance from the sun as us - specials often assert various made up stuff at this point). O2 is also IR inert, ie most of the Earth’s atmosphere is IR inert. The atmosphere's major IR active gases are CO2, water vapour and ozone O3. The specials will yell H2O is the most active (after lying about CO2, why not lie more) but the same problem arises if you try to make a steam powered laser - that is the amount of vapour is dependant on operating temperature and any extra H2O will condense out as a liquid.


The helium gas helps in removing kinetic energy from the 100 CO2 vibration mode which is the level 3 we mentioned earlier that we wish to depopulate quickly.

And that's the pew-pew( or rather the bgzzzzzzzzzzzzzt) that is a CO2 laser in a very short summary.

If you're a denier (or if you prefer a CO2 sceptic, I'll call you anything you wish if you agree to this) maybe we could organise a bit of an outing to a university - get a TV camera crew, televise you giving personal injury wager then we'll attempt to cut off your finger. In our world, based upon prior observation, and other hi-falootin theory crap, you won't feel a thing .. at first .. as flesh is burnt, blood vessels cauterised, nerve endings killed - there'll be an unmistakable visual and stench - a little after that I'd imagine it wouldn't tickle. BUT - in your world, the laser would fail as the CO2 infra-red crap is all a UN single government hoax (or something) and you will have heroically killed the global warming fraud at it's very base. You will so show the invisible nothing from the end of the laser to be a fraud perpetrated by grant hungry scientists that have been cooking their research because no-one would pay them if they showed teh truth. Please let us know if you want to settle this, I'll ring ACA, 60minutes etc - if any of them wish to pay I'll happily let you keep all the money, I just wish to watch - you could so stick it to those eggheads.
Posted by DaveMcRae at Friday, April 16, 2010 19 comments:

Naomi Oreskes, Professor of History and Science Studies at the University of California San Diego is about to release her book Merchants of Doubt.

She published a literature survey of peer-reviewed scientific papers on global climate change in the Science Journal, Dec 2004. From that she tells that she got a huge amount of hate mail and threats. Instead of being intimidated she, as a historian, instead took this as raw material and began investigating what's behind this wingnuttery. I do think the deniers now regret this.

If you haven't caught her before - or you would like a review of the history of science regarding climate change potential via CO2 - she does this in the first 1/2 of this video at the University of California TV (58 minutes, Dec2007) - the 2nd half being the manufacture of "scientific debate".
(Tim Lambert has a chapter list here and discussion of the video)

She now has a later video (1hour13min, Mar2010) discussing her book, also doing a quick review of the history. Watch the latter if you're time constrained but both are very good.

I'm looking forward to getting a copy of her book.